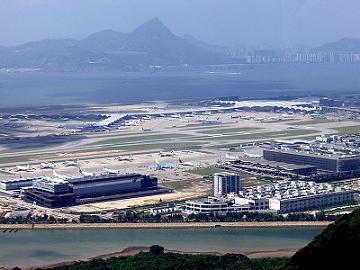 Hong Kong International Airport is built on a large artificial island about 40km from Hong Kong’s city centre. The airport links 150 destinations around the world including 40 cities in mainland China. in 2015 there were more than 68 million passengers.

The Airport Express takes passengers from the airport to Hong Kong Station at Central in 24 minutes. It runs daily between 05.50 in the morning till 01.15 at night with a frequency of every 12 minutes. There are no other trains to the airport. Fare of a single journey is HKD100, a return is HKD180.
The Airport Express Travel Pass is only for tourists. The pass cost HK. It can be purchased at the airport on arrival.

Hotel coaches are available to take passengers to and from 45 major hotels in Hong Kong. Boarder point is in the Coach Station at Terminal 2. Fare for a single trip is HKD130 (Kowloon) and HKD150 (HK Island).

The airport also has extensive land and sea connections to cities in mainland China. A trip to Guangzhou with one of the bus coaches takes between 2.30-3.30 hours. The bus makes a stop at Jinan University, Haizhu, Liuhuajinhan Exhibition Center Station, Dongfang Hotel and the coach station in Guangzhou.

We use cookies to ensure that we give you the best experience on our website. If you continue to use this site we will assume that you are happy with it.Ok